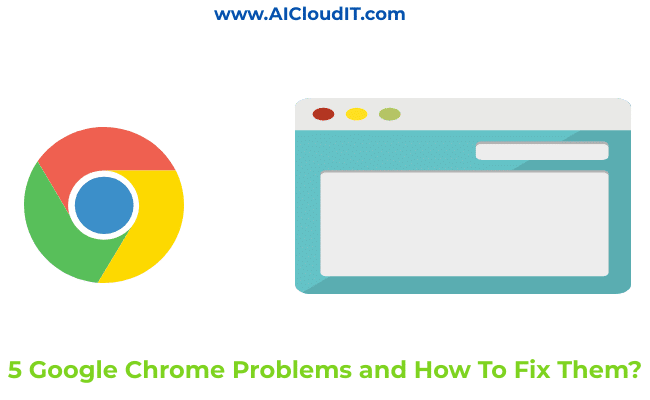 Google Chrome is the most used internet browser. For many years, the number of users of Chrome has been increasing exponentially. Despite all the efforts of Google to improve Chrome, the users face many problems and come across various errors while using Chrome. Some of the common problems faced by the users of Chrome are listed below, along with the ways to fix them.

List of Google Chrome problems and How To Fix?

1. Crashing of the webpage.

● Close other tabs Close the tabs that are opened unnecessarily as it reduces the load on the computer and might prevent the webpage from crashing again.

● Check for malware Use antivirus software to check for any malware or viruses on the computer because your computer might have become slow due to that.

Many users encounter this regularly. This could be because of the usage of an outdated version of Google Chrome on your computer or due to a lack of available storage in the computer.

● Close unnecessarily opened apps Another reason why Chrome crashes are due to the lack of storage in the computer. Try closing apps to free up space in the computer. Also, in general, unnecessary apps should be uninstalled to optimize the usage of the system.

3. Chrome is not opening at all.

This problem occurs on many devices. Sometimes, the system has an outdated version of Chrome which may lead to Chrome not opening.

● Check for viruses. More often than not, software crashes due to malware and viruses. Open your antivirus software and check for malware.

● Uninstall and reinstall Chrome. There could be something wrong with the application version of Chrome that might be causing problems.

To fix this, try uninstalling and reinstalling Chrome. But do not forget to check the box to delete browsing data before uninstalling it.

There have been various reports from users about Chrome running slow on their computers. This could again be because of slow internet speed.

● Check internet speed. Again, you need to be sure that it is not your slow internet speed that is causing Chrome to run slow. Try using another browser to check if your internet connection is working fine or not.

● Delete cache Cache constitutes the temporary files stored on a system. They use up a lot of storage and space on a computer, and that, in turn, causes the system to slow down. Try deleting the cache and old files stored on your computer to fasten your system and, in turn, fasten the speed of Chrome.

● Add-Ons consume a lot of system resources. Each add-on is another tab that runs all the time. Check if some add-ons are not needed and can be deleted to free up space on your system.

● Upgrade your computer if the whole computer is getting slow. This option is a little expensive but will solve most of your problems. And if you use your computer for all your work, then this is an investment rather than an expense.

Another error that users face is the Failure in updating Google Chrome. This could be because the updates have been disabled by the administrator, so check that first.

● Permanently switch browsers Failure in updating Chrome could be because your system is old. Upgrading your system is the best possible solution for all these problems, but if you don’t want to upgrade your system just yet and if Chrome is giving you extreme trouble, then probably you should just stick to some other browser like Mozilla or Edge for the time being or maybe even permanently. We hope this article was of use and will help you to solve your Google Chrome problem.

Standard Form of IT Procurement Contracts