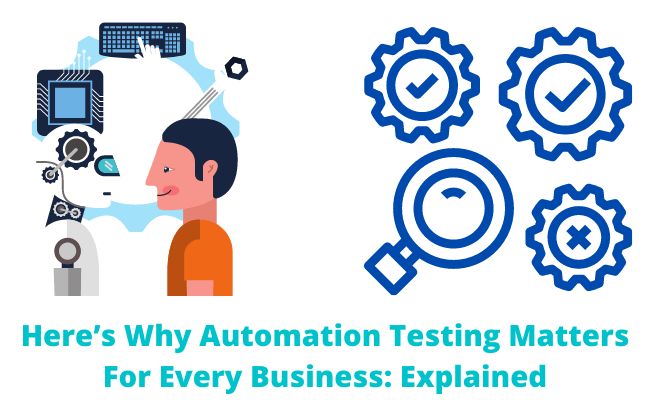 Before your website, software, or mobile application goes to market, you need to be certain that your product works seamlessly, smoothly, and without errors. To reach this level of flawlessness, your product needs to be tested again and again, under different scenarios. Kinks, if any, have to be found and smoothed out.

Traditionally, software QA testing was done manually, either in-house by the Quality Assurance (QA) team or by a team of outsourced QA engineers. However, QA Automated Testing Services is now taking the market by storm, and we can safely say that they are here to stay.

Read more: Everything You Need to Know About TensorFlow 2.0: A Guide

What is Test Automation?

Test Automation is the process of automating the execution of tests and comparison of the results against expected outcomes. Automated tests are a code or a mini-software, often specific to each product and test case, but can also have wider applicability.

More specifically, test automation tools and extensions allow the QA team to measure several code quality metrics like code coverage (the percentage of code being tested), technical debt, code semantics check, etc. These assessments are undertaken simultaneously with the execution of the automated tests as part of CI setup or DevOps workflow.

This is made possible by the fact that the tests co-exist with the rest of the code, allowing evaluation of the quality of huge codebases by parsing the source code during the automated build phase in a matter of minutes, which is impossible in manual testing.

How to Develop a Good Test Automation Strategy?

QA automation testing services aim to empower businesses by accelerating releases, increasing testing coverage, and finding as many defects as possible before the product goes to market. This involves an array of testing and around-testing components: test automation planning, tool selection, construction/maintenance of the testing environment, implementation of the automated tests, testing data preparation, designing and maintenance of the automated test scripts, etc.

How to Create an Automation Framework?

An automation framework is a set of guidelines to:

The following are the most commonly used types of automation frameworks:

Depending on the product under testing, several tests can be automated.

And that’s why Test Automation matters to you.

The quality of your product is your number one priority and non-negotiable. QA automation testing services will:

Everything You Need to Know About TensorFlow 2.0: A Guide

How to Pick a Web Platform for Your Business?

How the Application of Artificial Intelligence Assists Businesses?

10 Amazing Benefits or Uses of Virtual Reality in 2022